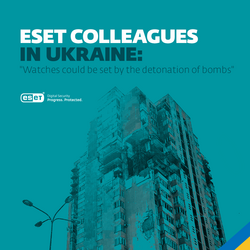 This is a slightly more personal story than one you’d usually read here because it involves my partner colleagues in Ukraine who are so much more to me than that. It relates the lived experience of many whom I have known throughout my more than a decade at ESET.

During the summer of 2022, I spent almost three weeks in Ukraine with award-winning photographer Michal Burza as a freelance writer for the largest Slovak daily newspaper and news portal SME. But I didn't go to meet my colleagues as a reporter. I was also in Ukraine on personal leave from my work in cybersecurity research in order to help bring forward the story of the people of Ukraine.

I came as a friend, not as an ESET research communications manager or a reporter
This story has its origin with people I have been working with for many years as a communications manager at ESET, a company for which our colleagues in Ukraine are not just ordinary colleagues but also friends. These are friends who continue to help protect the devices of millions of ESET customers in Ukraine, even while under enemy fire (both from real and cyber weapons).

Likewise, I didn't come as an ESET colleague, much less as a journalist, but as a friend. I spent long, emotional hours in conversations with them. Although we also walked around Kyiv and had a good time before “wartime” curfew started each night, it was mingled with sadness, pain, and determination: personal and professional.

I think that some of us may already be numbed to images of the Russian war in Ukraine and have perhaps started to overlook them. The numbing ritual is all too familiar. A news presenter stands in front of a map of Ukraine and shows the movements of Russian troops. It shows where the Russian rockets landed, how many lives they claimed, and what they destroyed – mainly civilian targets. All of this is accompanied by powerful, and simultaneously emotionless, shots of burning apartment buildings, department stores, universities ... it's something akin to a daily weather forecast. But behind these images of destruction are the real human destinies of individuals, families, and communities.

War is not like a weather forecast on TV
The devastation that the occupying Russian troops have wrought on the country is much greater than you could imagine from television footage alone. If you stood for just a few minutes near a civilian apartment building knowing that the Russian aggressors considered it to be a legitimate target, you’d feel the threat palpably.

We traveled from west to east through a dozen cities. After Uzhhorod, our real first stop was Kyiv and its Russian-occupied surroundings: Bucha, Irpin, Horenka, Borodyanka, and Hostomel. Then we went northeast to Chernihiv, which is near the Belarusian border and where the Russians destroyed not only civilian apartment buildings, but also a number of schools. Next we visited Sumy, which is near the Russian border and where the Russians did not get too far into the city, but did destroy the surrounding villages of Trostyanets and Okhtyrka. Finally, we arrived in Kharkiv, the second largest Ukrainian city, where many locals speak Russian. The bombs and mortar shells have already destroyed part of the Saltivka residential neighborhood. This is a place where the war is still active today with rockets flying in daily from Belgorod, the Russian city just across the border, and active shelling taking place every few minutes in certain places.

ESET undoubtedly belongs to this story of Ukraine. Not because I joined part of it, but because the people of Ukraine are part of it. And some of these people are colleagues who consult with ESET researchers, sell ESET’s technology, and support users of ESET products and services in Ukraine. So how is the ESET community in Kyiv and Chernihiv faring, where war rages daily?

"I didn't think the war had started"
Oleksandr Illiusha (age 44) heads technical support at ESET's partner company in Kyiv known as ESET-Ukraine. He remembers the eve of the war on February 23 as if it were yesterday. We were working together on the analysis of a malware discovery that was barely a few hours in the making.

ESET researchers in Bratislava were pulling apart the new destructive HermeticWiper malware we discovered, which heralded the invasion. We all worked late into the night ensuring we kept our users in Ukraine protected and, at the same time, answering the questions of journalists from around the world.

Neither Oleksandr nor I had any idea that this cyber shot would be the vanguard of this war. We had barely settled in for two or three hours of sleep when Oleksandr was awakened by reports of heavy weapons fire in Kyiv. There were times when several Russian trucks with weapons and a Russian tank were destroyed near the ESET-Ukraine office, which is not far from the main traffic artery, the highway to and from Kyiv. This is the same highway that Western journalists later began to call the "highway of death." Even now, it is lined with bombed and burned-out buildings as well as collapsed bridges.

“We didn't assume that HermeticWiper meant the start of a shooting war. We have experienced many similar attacks over the years," says Oleksandr. This time, however, the cyberattacks intensified afterward. "It was certainly dramatic from this point of view as well."

We were all sitting in the meeting room of ESET-Ukraine and took our first shot of a traditional Ukrainian drink. After all, we were among friends. Oleksandr and his wife and children have remained in the capital throughout the fighting. It's his home. "Although there was also fighting on the street near my apartment building, I am optimistic that this war will end." He recalled that first day of the war, when he went to work like any other day. Even though the day’s meetings gradually began to be canceled, the team continued to work with some clients on the modernization of their security infrastructure.

Escaped from Donetsk, now in Kyiv
Denys Afanasiev (age 39) was also in the office that day. He has been working for ESET-Ukraine for several years now, but only after having escaped from Russian-occupied Donetsk in 2017. The Russian militants had established an occupation regime there during the first stage of the war in parts of Donetsk and Luhansk regions in 2014. Denys needed to stop by the office, even on this day when rockets started exploding around the city, because he’d left his computer there.

The Kyiv metro was still running that morning. But when he was returning home, it was no longer the subway, it was a means of escape. People were already trying to leave the capital in droves. "I saw one taxi go off the road to avoid the traffic jam, it simply went on the train tracks." It was the second time this war had visited his life; he decided to stay, not to be a refugee. He has remained in Kyiv throughout the war.

Escaped from Kyiv
Denys’ colleague and friend Roman Zarutskyi (age 26), who has experienced war for the first time, thought otherwise. He immediately filled his car's fuel tank and as many gas cans as possible and began to plan how to reach some kind of safety. Google Maps gave him a first glimpse of how difficult it would be. There were already fierce battles for the Gostomel airport not far from the capital. "I had only one goal: to get my family away," he says. A journey to one of the villages outside Kyiv typically takes an hour. "It took us eight hours to get out of town," he explains.

Oleksandr Liudvichenko (age 32) had no doubts about the start of the war. That Thursday morning, he was awoken by explosions near his apartment. Only his morning coffee calmed him down. He understood his world had changed and, like Roman, he prioritized leaving that evening.

Some went to the army
One of the members of Oleksandr's team didn’t hesitate to enlist in the army immediately. "He called me at six in the morning and by eleven he was already at the recruitment center," says Oleksandr.

Even on the front, he (age 34) continued to provide assistance to users of the ESET Technology Alliance solutions in which he specializes. "An ESET guy won't deny himself," laughs Oleksandr.

Immediately after the outbreak of the war, Serhii Kadet (age 35) also enlisted in the army, but he has not yet been called up. "I’ve only held a Kalashnikov in my hand once and fired it maybe three times," he smiles. However, he’s helped in the defense of the city as much as possible by raising funds and securing supplies. He also visited the Kyiv militia’s defensive positions while Russian troops were trying to enter the city.

"The watch could be set according to the bombing"
ShapeChernihiv isn’t far from the Belarusian border: only three-quarters of an hour by car. However, the Russians never reached the city by land. Instead, they showed up in full with rockets and air raids. Traces of the explosions are practically everywhere. At the time of writing, Russian attacks had been going on for several days. And for several weeks, citizens and defenders alike only had limited supplies of food and water, and electricity for only a few hours per day. This, a city that has 300,000 inhabitants, is surrounded by bombed-out apartment buildings and industrial facilities. One of the most intense fronts in the battles for Kyiv was here.

Nightly bombing and shelling has lasted for two months. “A watch could be adjusted according to the frequency of explosions. Every night at eleven o’clock it would begin,” says another colleague, Dmytro Borshchan (age 35). It is hard for him to speak about these days of terror. He spent part of the war in Chernihiv, then moved to Kyiv. However, at the time of this interview we were sitting together on the terrace of a restaurant in Chernihiv.

They shared on Telegram: "We survived another day"
Every evening a member of the team had to report their status. To accomplish this, they set up a joint group on the Telegram app, which is one of the most popular in Ukraine. "We wrote amongst ourselves that we survived today too. And then we had a drink, for example. I think that's a good reason," explains Volodymyr Zakharenko (age 37), who remains optimistic today.

"If war and terror can give anything positive at all, it is the fact that we are closer to each other than ever before," adds Oleksandr. And he's right. Just a few days after this meeting, residential apartment buildings in the city were hit again by Russian rockets. But even that didn't stop me or, most importantly, them from having a BBQ before I left. ESET has a mission in Ukraine to protect its users, and these people fulfill it to the letter like few others.

How ESET helps Ukraine
Ever since the war started, ESET has been helping out. With the help of ESET Foundation, we have donated 700,000 EUR to provide humanitarian assistance to the citizens of Ukraine. Even today, our employees keep volunteering and helping as much as they can. Our colleagues have offered homes to 65 Ukrainian families. And in addition, ESET researchers were the first to discover a new type of wiper malware detected in Ukraine. And to this day, they continue to monitor the situation actively.