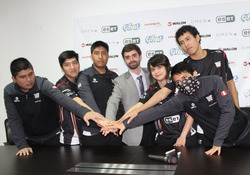 Courage and passion are two of the most fundamental values at ESET – both form a core part of ESET’s identity and have driven it to become a leading company in global information security. ESET’s goal is for people and companies to truly enjoy safer technology. That is why ESET has developed a series of consumer solutions that, among other benefits, offer a superior level of detection while maintaining very low system impact, especially when throttled in Gamer Mode. This is what makes ESET products very popular among gamers.

Among the millions of users who prefer ESET’s solutions is the Infamous Gaming team who, just like ESET, are characterized by courage and passion. This Peruvian team performed remarkably well in The International tournament that ran from August 15 to 25, 2019, in Shanghai. Players K1, Chris Luck, Wisper (from Bolivia), Scofield and Stinger represented the only Latin American team at the competition.

To achieve such an entry wasn’t easy, of course. First, Infamous had to play long and intense qualifying rounds against other highly accomplished teams. After competing on the Dota Pro Circuit, Infamous was pitted against paiN Gaming, a Brazilian team that was Latin America’s only representative team in last year’s edition of the tournament. The ESET-sponsored Peruvian team won 3 – 0, winning the Latin American qualifier to become one of the 18 participating teams at The International…but this was just the first step.

Once in Shanghai, Infamous had to pass the group stage. The 18 participants were divided into two groups (A and B) in which each team played every other team in their group in a best-of-two matchup. With seven victories and nine losses, Infamous obtained fifth place in group B and qualified for the next round. The top four teams of each group advanced to the upper bracket of the main event, while the teams in fifth – eighth place in each group – including Infamous – advanced to the lower bracket.

Infamous played against three rivals in the lower bracket elimination rounds. The first round, which was played as a best-of-one matchup, was a victory against Keen Gaming. The remaining rounds were best-of-three matchups. In the second round, the Peruvian team surprisingly defeated Newbee 2 – 1 and thus entered the top eight. Just to clarify, Newbee had qualified in third place, ahead of Infamous in the group stage. Finally, in the third round, Infamous played Team Secret, a team that had previously obtained the highest ranking in the Dota Pro Circuit, but lost 2 – 0.

Despite the loss, the results were very encouraging, especially since the team was very highly praised by critics for their style of play and for achieving, for the first time in history, a position among the top eight teams in the world. ESET is very proud to have accompanied K1, Chris Luck, Wisper, Scofield, Stinger and the entire Infamous team on this incredible adventure, one that has led them to the highest caliber of eSports competition in the world.

Professional eSports teams like Infamous Gaming, as much as the millions of gaming enthusiasts online, need to stay safe while enjoying the highest performance possible. That is why Infamous leveraged ESET security solutions to secure their machines. Make sure to use a high-quality security suite on your machine and stick to the following advice: Use a password manager to create strong and unique passwords for all your gaming accounts; double protect your password with 2FA wherever possible; be very careful when clicking on links in your email or in gaming chat rooms; and finally, when buying power-ups or virtual money, stay away from unauthorized sites.