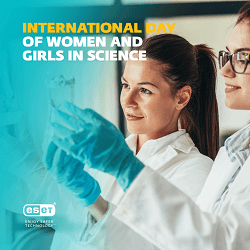 This Thursday, February 11, marks the sixth annual International Day of Women and Girls in Science, a day instituted by the United Nations (UN) to underline the role women play in science and technology. The UN reports that less than 30% of researchers worldwide are women and around 30% of all female students pursue STEM-related fields in higher education.

Supporting women in science is part of the ESET Foundation’s work, with 2021 marking the sixth annual ESET Women in Cybersecurity Scholarship. This effort was launched in the US in 2016 to help support and encourage women who aspire to have a career in information security.

Last year we celebrated the day by showcasing five inspirational women and their work in the field of computing, from mid-nineteenth century computer programmer Ada Lovelace to the co-founder of Flickr, Caterina Fake. This year, we’re taking a look at some of the findings from our recent global research survey into financial technology (FinTech), with responses from 10,000 adults across the UK, US, Australia, Brazil and Japan. We surveyed consumers in order to explore their attitudes to financial technology and cybersecurity, particularly in relation to FinTech apps. Our findings reveal similar trends between men and women in relation to adoption of FinTech and cybersecurity.

Phishing scams are one of the most common types of cyberattacks, and most people have received a phishing email at some point in their life, whether or not they were aware of it. Our research showed that men and women expressed similar levels of confidence in being able to spot a fraudulent email, with 70% of men believing they could, compared to 68% of women. However, more men than women strongly agreed they could spot a fraudulent email (30% vs. 23%), suggesting a slightly higher level of confidence amongst men, whether or not this is misplaced.

When it comes to their actual usage of FinTech applications, men and women were very similar. Almost one-fifth (18%) of men use more than five FinTech applications/platforms, compared to 15% of women. While men were slightly more likely to tout their tech skills, margins were quite tight – this might intimate that users were conflating their interest in tech with their skill set. However, there was a slightly bigger difference in those who agreed that there is adequate information available on the potential risks of FinTech applications, with half of men (50%) agreeing, compared to 43% of women.

The research also revealed that the most likely indicator for using more than five FinTech apps was in those who marked themselves as ‘intermediate’ (39%) or ‘advanced’ (36%) in tech proficiency, compared to those who identified as ‘basic’. It’s also worth noting that of those who use more than five FinTech apps 55% are men and 45% are women, showing a slightly higher uptake rate in men within our research.

Although our research focuses on financial technology and cybersecurity, the minimal split between men and women may shed some light on the actual interest levels of women in tech. Today serves as a reminder that we must continue to encourage future innovators to realize their full potential – that way our ideas may become more innovative too.