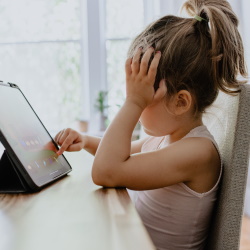 It is often remarked that kids these days spend their whole lives on their phones, neglecting to interact with the real world in the same way their parents did when they grew up. Although it is undeniable that screen time is a major part of modern children’s lives – especially over the past few months of lockdown – it can be easy to overlook the huge changes that have taken place in recent decades in how we communicate and interact.

Rapid advancements in technology mean that kids growing up now are being raised in a world that is almost unrecognisable from the one that their parents knew. It is important that parents recognise these differences in order to better understand their children and the issues that they navigate in their day-to-day lives.

To highlight this divide, ESET recently did some research into parents’ and children’s experiences with technology, in particular mobile phones, and found that the contrast in childhood mobile ownership between the two groups is stark. Surveying parents of 10- to 18-year-olds in the UK, ESET found that the average age to first own a mobile phone was 24, with 44% of those polled receiving them after their 21st birthday. Comparatively, the average age at which the children of those parents got their first phone was 11, and 73% had a phone before the age of 12.

This modern introduction of phones at an early age is just the tip of the iceberg, though. Not only are phones a much bigger part of growing up now than they used to be, but these devices have also had a major impact on practically all aspects of kids’ lives.

Let’s take computers, for instance: desktop computers only really became commonplace in the 1980s, finding their way into classrooms and home offices while many parents of today were still in school themselves. These early computers commonly operated on dial-up internet, meaning that browsing capabilities were somewhat limited until the introduction of broadband in the 1990s. These days, kids possess more computing power in their palm than their parents had on a full-sized desktop, and they have access to both high-speed broadband and 4G mobile internet to boot.

This, in turn, means a massive expansion in what children are capable of doing with their phones, which can be witnessed in the way they communicate. Children of the 20th century relied upon home phones, and later rudimentary mobile phones, to coordinate their plans, but nowadays kids can correspond with their contacts across a plethora of messaging platforms and social networks, communicating with text, images, video, and much more.

Similarly, modern-day smartphones contain digital cameras that far outstrip the capabilities of the film cameras that their parents used, along with enough memory to store endless songs, photos, and podcasts to keep them entertained. Add to this the huge variety of apps that allow for video streaming, handheld gaming, and content sharing, and it is clear to see why kids might want to spend their time glued to the screen.

Essentially, children now have a computer, camera, stereo, video player and more all rolled into one at their disposal 24 hours a day. It’s therefore hard to blame them for being fond of their phones, but it is nevertheless important to make sure that they are using these devices safely. It may seem a daunting task to manage the many functions of a child’s mobile device, but it does not need to be overwhelming.

Installing a trusted antivirus program, such as ESET Mobile Security, on your child’s mobile phone can reduce the risks they are exposed to. This, combined with an understanding of kids’ habits and frank conversations about how to stay safe online, will allow for effective oversight of their screen time.