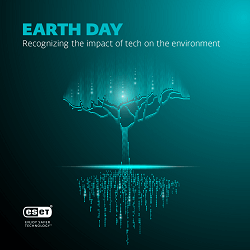 Every year, since its inception in 1970, Earth Day has been celebrated on April 22, with a clear mission: to educate about the environment. Society has changed dramatically in the past year, let alone in the 51 years since Earth Day began. One huge aspect of this transformation is the increase in technology use. In 1970, for example, there were no mass-produced mobile phones, whereas in 2021, an estimated 3.8 billion people now have a smartphone.

In terms of environmental damage, some is easy to see: landfills chock-full of single-use plastics, factories pumping out volumes of emissions, or inordinately huge areas of deforestation. However, significant harm is also caused by less obvious sources, including the habits we undertake every day with our technology. The harmful impacts of technology on the environment can result from issues such as planned obsolescence by design, unrepairable devices, as well as energy use, whether that of individuals or of data centers. It’s easy to forget about the natural world when we go online – the internet and the environment can seem worlds apart – but to tackle the issues affecting the earth’s environment negatively, we must recognize the role of technology.

There is no one figure to sum up the impact of digital technologies on the environment, but estimates suggest that the technology sector represents at least 1.4% of global greenhouse gas emissions, and could potentially be as high as 5.9%. A significant contributor is data centers. Saving files to the cloud may seem like an innocuous activity; however, this isn’t a case of a magic disappearing act – the information is stored in data centers, which currently account for around 2% of total global electricity consumption. Some of the methods of reducing the impact of data centers may surprise you – some data centers are now being built underwater to reduce the cost of cooling them.

The impact of physical structures is not the only environmental cost of technology. Software also plays an important role, for better or worse. When your device runs slowly, it is annoying – you’re trying to get things done and we have become used to instant responses. Beyond the personal, programs that slow down technology or have a high system impact contribute to environmental damage in multiple ways. Devices require more energy to run when software is slowing them down, meaning shorter charge cycles and greater electricity usage. Additionally, the “replace, not repair” mentality leads many people to dispose of slow devices, which often end up in a landfill.

While it may seem like all bad news, this is certainly not true. Software with low system impact helps devices run quickly, reduces energy usage, and minimizes environmental damage. New technological advancements can benefit the environment, such as solar glass and the use of environmental sensors. The presence of technology in our lives is not going away anytime soon, nor should it, but we can pay attention to improving existing tools and minimizing harmful impacts.